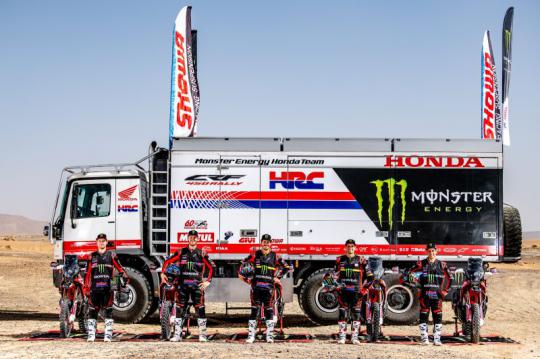 The new HRC teams for 2020 have been revealed in the auditorium of the EICMA motorcycle show in Milan, with Monster Energy Honda Team showing off their most recent signing.

The Stella Polare Auditorium at Milan’s EICMA hosted the presentation of the new 2020 HRC line-ups. In the audience, leading journalists from the motorcycle world gave a rapturous greeting to the announcement of next season’s squads for the various disciplines in which HRC’s riders will officially compete: MotoGP, Superbike, Motocross, Trial and Rally. The main protagonists at the event were accompanied on the rostrum by Noriake Abe, Chief Officer for Motorcycle Operations at Honda Motor Co. and Shigeki Nomura, HRC President.

American Ricky Brabec, Argentinian Kevin Benavides, Spanish Joan Barreda, Chilean José Ignacio Cornejo and South African Aaron Maré will be the five Honda HRC riders who line up for the 2020 Dakar Rally on its maiden residence in the Middle East.

Aaron Maré, new team member
Monster Energy Honda Team has incorporated South African rider Aaron Maré into the ranks who is set to make his official 2020 Dakar Rally debut at the event in Saudi Arabia from January 5-17. Maré, with a motocross background, has previously participated with the team in a supporting role in the Cross-Country Rallies events in Chile and Morocco, is currently involved in private training in the build-up to the 2020 Dakar. The recent achievements of Aaron Maré include first place clinched at the Dubai International Baja and the UAE Baja Championship, as well as victory in the Desert Storm Rally.

Former rider Ruben Faria as been appointed as Monster Energy Honda Team General Manager. Faria was the Sporting Manager of the Team in the last Dakar.

At the EICMA show, Honda will exhibit the team’s competition bike, the CRF450 RALLY, set to compete in the forthcoming Dakar Rally. It can be found on the Honda stand located in Pavilion 22, Stand O 48. The EICMA Motorcycle Show will be open to the public from November 7-10.

I hope I’m still one of the favourites for this edition of Dakar Rally! I face my fifth Dakar as if I was entering just another stage in 2019, but with both determination and speed. After all the work I have done from the last Dakar until now, not much has changed, so I’m going into this Dakar to add more fuel to the fire and show all the fans that I’m here for one thing only and that I have set my sights firmly on winning the rally.

Everything is new in the 2020 Dakar Rally! Even the dunes and the sand are different to what we have ridden on in recent years. It will be something brand new for all the participants, which will make it more unexpected and more entertaining and I’m sure that we can expect a lot of surprises. But, for sure, we will miss South America. I’m very proud to form part of this great team. This year we are going to fight very hard to achieve our aim which has resisted us for so long and that we deserve.

The Dakar Rally is the main objective for the team and all the Monster Energy Honda Team riders will fight to bring the trophy home next year. Despite changing the continent, it will remain the most difficult race in the world. Being here, in Honda, with Marc Márquez, with Tim Gasjer, with Toni Bou… you realize what an honour it is to be part of this great family and to be able to represent Honda in the races.

Being part of Honda is an honour. Being with the best riders from other specialties makes you really realize that you are in a great structure. As far as our goal is concerned, it is clear that we will be fighting hard to try to bring home the best possible result from this next Dakar adventure.

I am excited and honoured to be part of the Monster Energy Honda racing team for the Dakar Rally. This is definitely a dream come true for me. I have worked hard to get here and I am extremely grateful for the opportunity. I hope the Dakar is successful for the team.