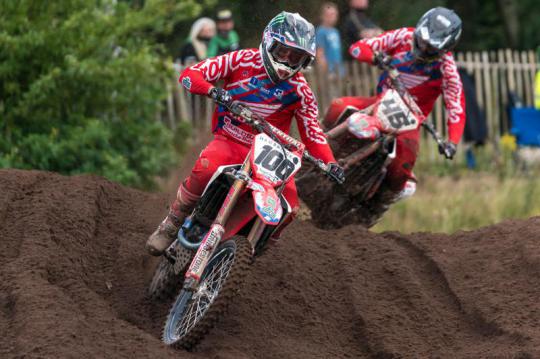 End of an era for Buildbase and Honda


It’s been a partnership that has seen the team win at the highest level in the UK, with race and title wins in the British ACU and MX National championships, and UK Arenacross for riders and as a manufacturer.


And the Buildbase-backed squad has not only established Honda’s team as the most respected and highest-profile team in the UK, but also given an opportunity for talent to flourish and go on to greater achievements.


Honda team manager, triple world 500 champion Dave Thorpe, said: “Together with Buildbase, we have built the team into the envy of the whole paddock with a truly professional set-up, dedicated riders and technicians and the best bikes on the track – the Honda CRF450R and CRF250R.


“Buildbase’s backing has been very much a part of the operation from day one, with total support and help for whatever we have needed. Of course, we are all sad to wave goodbye to our partners and friends at Buildbase and I would like to thank everyone involved there for the incredible support they have given us since we launched in 2012.”


Buildbase’s Managing Director Paul Roche said: “I am delighted with the success that as a team we have enjoyed over the last nine years. I am proud of the role that we have played but now is the right time for us to move on to new projects and new challenges. I would like to thank and congratulate Dave Thorpe on building the very best team in British motocross!”


In nine years of racing, the Buildbase team has fielded some of the world’s best riders including former world MX1 champion Steve Ramon and ex-junior world champion Steven Clarke who is part of the 2020 squad.


Before he quit the dirt to focus on road racing, Graeme Irwin gave the team its first ACU British MX1 championship title in 2017. And this year, with Covid-19 halting the ACU series, the only professional championship to be run was the MX Nationals. This was initially led by the team’s Jake Nicholls before his Buildbase Honda team-mate Tommy Searle took over and clinched the championship in his first year for the team. And in the MX2 class, Steven Clarke took a clear second place in the series. It’s a successful end to the Buildbase years for Honda.


The Honda team will continue to compete in 2021, and more news will be released when it’s available.