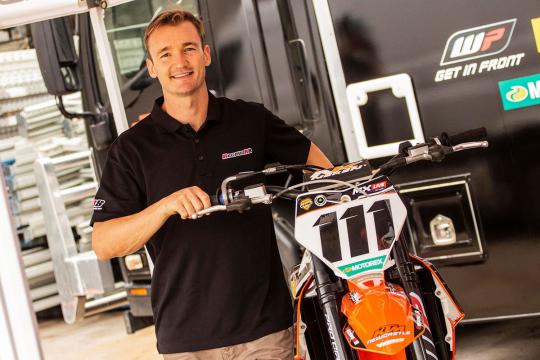 Multiple Australian champion due to spend at least six months off the bike.

After suffering fractures to his vertebrae and ribs in the incident, Ferris was transferred from the Sunshine Coast to Brisbane Hospital earlier in the week, where the operation was completed.

“Renae and I would like to take this time to thank everyone for the kind words and support across social media, the numerous calls and texts we received and finally everyone at the Conondale club who assisted me from the crash,” Ferris commented. “I also have to thank the team of doctors and surgeons between the two hospitals that have been a huge help with my recovery. This crash was unfortunate as I have been feeling great on the bike this year and itching to go racing.

“For now, my focus is solely on my rehab and getting strong enough to spend quality time with my family, chasing the kids around at the farm again. I have been here before with injuries and know the process, it is time to dedicate myself to the rehab with 100 percent focus and I know I can bounce back as strong as ever when it’s time to get back on the bike. I will update everyone of my progress accordingly and once again thank you to the team, the industry and my fans for the unwavering support.”

While it’s too soon to confirm when Ferris will be back on the bike, the Recover8 KTM Thor team has indicated that it won’t be until 2021 in six to eight months time. It isn’t yet clear if the Australian Motocross Championship will take place this year as a result of COVID-19.

“Dean has a long road ahead of him in regards to recovery, but I am very pleased to report the surgery was successful and there have been no further complications from the back injury,” explained Kevin Williams, business development manager of Raceline Performance. “Dean has been able to get out of bed under his own power and walk around a little since surgery was completed and all reports are that he will make a full recovery.

“I know the question everyone wants to ask is, when will Dean be back on the bike? At this stage it is early days, but with Dean’s championship mindset I know he will dedicate himself to rehabilitation and his recovery to ensure he is ready for a return to riding as soon as possible. We are optimistically anticipating a six- to eight-month recovery period before the injuries are stable enough to begin riding again.”