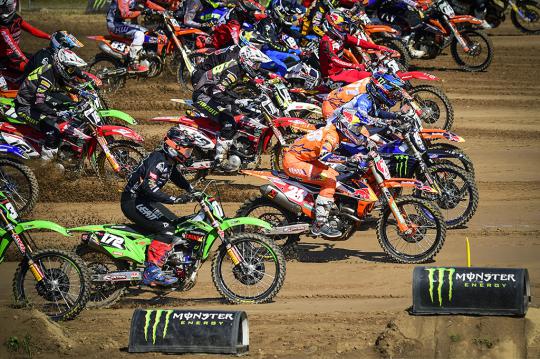 MXGP of Finland will welcome MXGP in 2021! More details

As anticipated when releasing the new MXGP calendar, the MXGP of Finland will make its first appearance in KimyRing in 2021 and is confirmed to take place there until 2023.

After months of waiting for the return of MXGP, the FIM Motocross World Championship has finally made its return with an epic trio of races in Kegums, Latvia. With the return of racing, it is the perfect opportunity to look forward to plenty more races as we finally make a comeback to Finland with the MXGP of Finland next season.

Due to the COVID-19 pandemic and as a result the numerous travel and safety restrictions in place, Infront Moto Racing and the event organiser Lahti Events Ltd made the difficult decision to postpone the much-anticipated event. Despite the rescheduled event this season, the FIM Motocross World Championship will return to the happiest place in the world next year, as riders will get the opportunity to ride the brand-new KymiRing circuit which will be purposely designed and built for MXGP!

It has been six years since an MXGP event has been held in Finland, with the 2014 edition taking place in Hyvinkää, that saw Red Bull KTM Factory Racing’s Antonio Cairoli and Jeffrey Herlings claim double race victories in MXGP and MX2. Cairoli was joined on the MXGP podium by Steven Frossard and Kevin Strijbos, meanwhile in MX2 it was Herlings who was joined by Tim Gajser and Jordi Tixier.

Located in the eastern town of the Lahti Region, Iitti, and situated 140km from Helsinki, the new KymiRing Motor Circuit is predominantly a road racing circuit and was due to host its very first major event in July of this year with the FIM MotoGP. Then the MXGP of Finland was originally due to take place on the 22nd-23rd of August featuring the MXGP, MX2, EMX250, EMX125 and EMX 2t riders, which has now been rescheduled to next season.

The 2021 MXGP of Finland is set to be even bigger and better, offering riders and fans a unique weekend to enjoy all the best moments of motocross, with the added bonus of the best elements of the Finnish culture, while surrounded by a beautiful scenery of lakes and forests.

Fans that already purchased tickets for the MXGP of Finland this season, will be able to use their tickets for the event next year, as the KymiRing Motor Circuit gears up for an unforgettable weekend in 2021!

David Luongo, CEO of Infront Moto Racing: “Despite the challenging times we were living with the Covid-19 pandemic, which caused the cancellation of the MXGP of Finland this year, we are very proud to announce that our collaboration with KymiRing and all the organizing team of Lahti Events will be confirmed until 2023. This means that the MXGP World Championship will be established for the next 3 years in Finland. We cannot wait for 2021 when the MXGP will finally be back to Finland for a very top-class event. I want to thank the local organizer Lahti Events and the Finnish Federation for their great support and determination”.

Learn more about the MXGP of Finland by checking out the special feature in the 78th issue of the MXGP Magazine. Click HERE!